Want to hire the perfect voice actor for your Chinese language project?

Before you reach out to a Chinese voice over artist or voice over agency, there are a few things you need to know about Traditional vs Simplified Chinese, Taiwanese and Cantonese.

This information will ensure that you hire a talent who speaks the correct language and dialect of your target audience. We’ll be discussing the differences between Mandarin, Cantonese, and Taiwanese in this blog.

We’ll begin by saying that we understand how getting a grasp of this subject can be difficult, especially if you’re new to languages. But don’t worry! We’ve put together this easy-to-understand guide to help you out.

A Brief Introduction to Chinese Languages

You may not realize it, but the term “Chinese language” is actually very vague. China itself is a massive country with over 1.41 billion people.

In order to choose the right voice over artist, you must know what dialect your target audience speaks. Mandarin and Cantonese are the two most commonly spoken Chinese dialects. Mainland China, Taiwan, and Singapore all speak Mandarin. It’s important to realize that Mandarin can be spoken with many different accents.

If your audience is in mainland China, you’ll want to hire a voice actor who speaks Standard Mandarin without an accent. This is also known as ‘Pu Tong Hua’.

If your audience is in Taiwan, you’ll want a voice actor who speaks Mandarin with either a Taiwanese accent (sometimes referred to as ‘Taiwanese Mandarin’) or a ‘Min Nan’ accent. A voice over agency that specializes in localization can help you determine the correct choice.

Cantonese is one of the Chinese dialects. It’s spoken in Guangdong province and Hong Kong. It is a completely different sounding language than Mandarin and more dynamic.

Other dialects such as Fuzhou, Xiang, and Gan are spread across Asia, including Shanghai, Western China, and the Hunan province.

An example of a Mandarin voice over

Traditional Chinese and Simplified Chinese are each highly preferred in very specific locations and by certain ethnicities. You’ll need to determine what region you’re targeting to be accurate with your voice over actor choice.

Here’s some background on the origins and differences between Traditional vs. Simplified Chinese.

What is Traditional Chinese?

Traditional Chinese is a writing system that looks beautiful on paper. There are over 50,000 detailed characters in the language. Modern dictionaries typically only list about 20,000 characters.

What is Simplified Chinese?

Simplified Chinese was established by the Chinese Communist Party (CCP) in 1949 as an official writing system. The CCP believed simplifying the language would increase literacy in the population. Simplified Chinese is based on the traditional form, but it has fewer characters. It also utilizes fewer strokes per character. (We would like to thank our longtime Chinese voice over talent Zhenyu Tan for his contribution to this blog. If you would like to know more about the difference in writing between Traditional and Simplified Chinese read his article.)

Simplified Chinese users have an average knowledge base of around 8,000 characters. The CCP also created an official “List of Commonly Used Standardized Characters.” It consists of a little under 300 characters.

We created this infographic to help you remember what spoken and written language you might choose based on your target market: 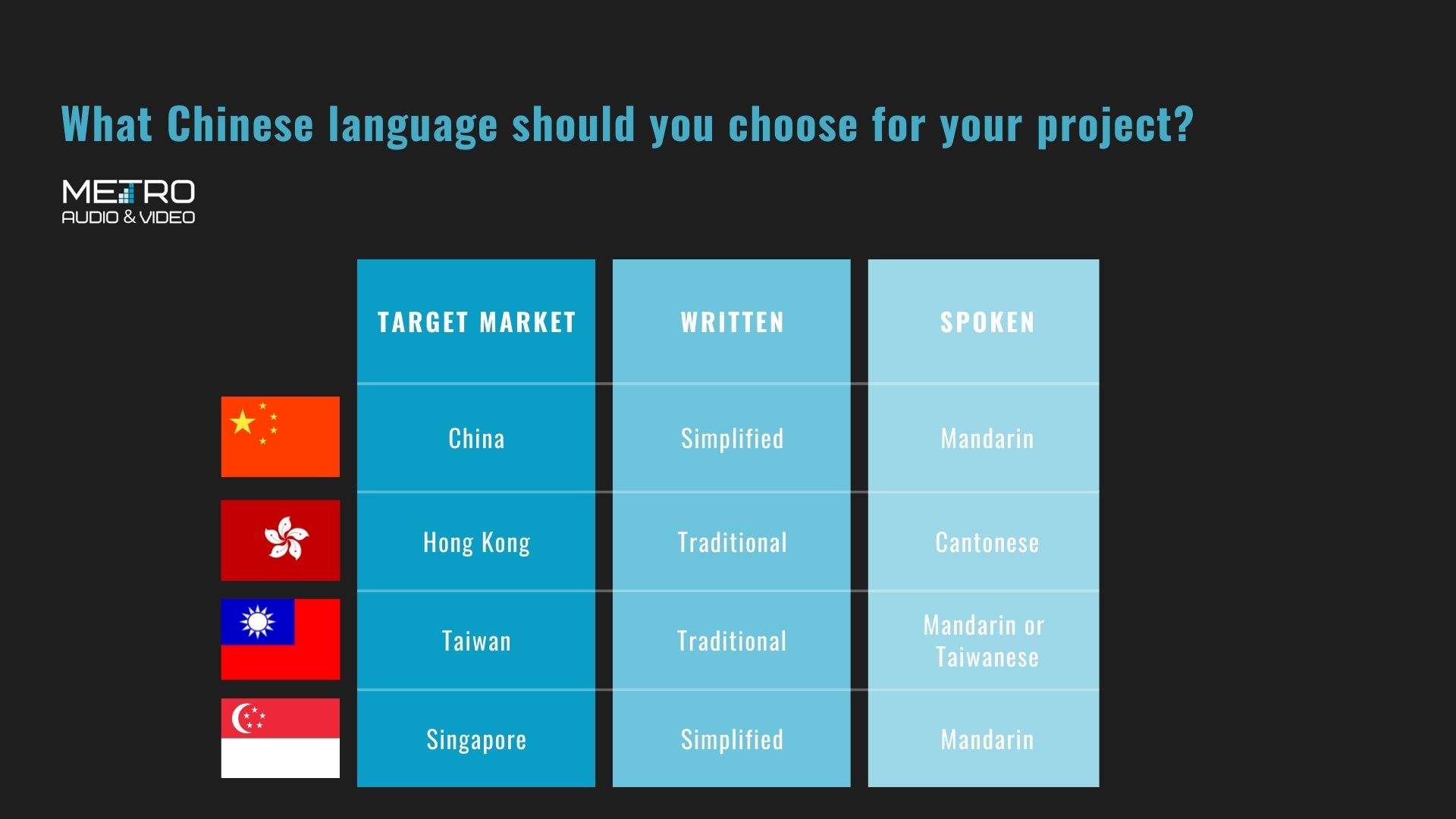 We hope you now have a better understanding of the different Chinese languages and dialects.

With this knowledge of Traditional vs. Simplified Chinese, Taiwanese and Cantonese, you can hire the right voice talent.