How To Hire A Voice Actor (Even A Foreign Language One!)

You’re a busy professional who’s been tasked with finding voice actors for your company’s latest project. You’ve never hired a voice talent before, and you don’t know where to begin. Let’s face it – there’s not much information out there about how to hire a voice actor for foreign language and English voice over projects. A quick online search brings up dozens of freelance marketplaces and voice over search sites. Immediately, you feel overwhelmed with thousands of voice talents to choose from. But you don’t want just any voice. And you don’t want to work with someone who will underdeliver or who will barely respond to you. You want to work with highly experienced and trustworthy voice talents – professionals that will make YOU stand out for a job well done.

Over the course of the next few blogs we’ll demonstrate the steps involved when you hire a voice actor. That way, you can understand the voice over process and have a stress-free project! Here are the first three things to prepare before starting.

If you’re reaching out globally, we advise that you know in advance who is going to hear you and how you’d like to be heard. This will help navigate your project in the right direction. Each voice over talent has a different character, age and tone, and it also helps to think about your ideal talent before beginning your project. In this example, Gibson was looking to adapt to the Japanese culture to properly represent their “hip vibe”, specifically that of Brent Mason who was featured in one of their videos. They were looking for the “Osaka” dialect, called “Osaka-ben” which was the coolest. It’s characterized as being both melodic and dynamic.

2. Before you hire a voice actor, have a script ready.

Writing, translating (if necessary for a foreign language project) and finalizing your script is the first step in any voice over project. As your writing team works on the script, ensure that they add any performance notes they want the voice talent to know. For example, they may want to tell the talent to pause after a particular line or to emphasize a word. These notes can change the style of the performance and how your message is communicated, so it’s important to include them. Your writing team should also note any specific terms that must be pronounced in English or your target language.

3. Determine whether you need your project timed or untimed.

It’s important to know whether your project is timed or untimed. We’ve provided samples of both types of scripts below. As you can see in the first graphic, a timed script includes timestamps that correspond with a video. For example, if you need a Chinese Mandarin voice over for an English video, you’ll want to provide your voice talent with a timestamped script. If you’re working with translated materials, be sure that the translator has access to your video. This way, he or she can make sure the translation is short enough to be in sync with what is going on in the video. If the translation is too long, the voice talent will have to speak too quickly to be understood, and the audio will be out of sync with the video. An untimed voice over project does not require syncing to a video. You can see an example in the second script below. E-learning courses are typically untimed. Phone prompts are also a good example of an untimed project. Example of an untimed voice over script 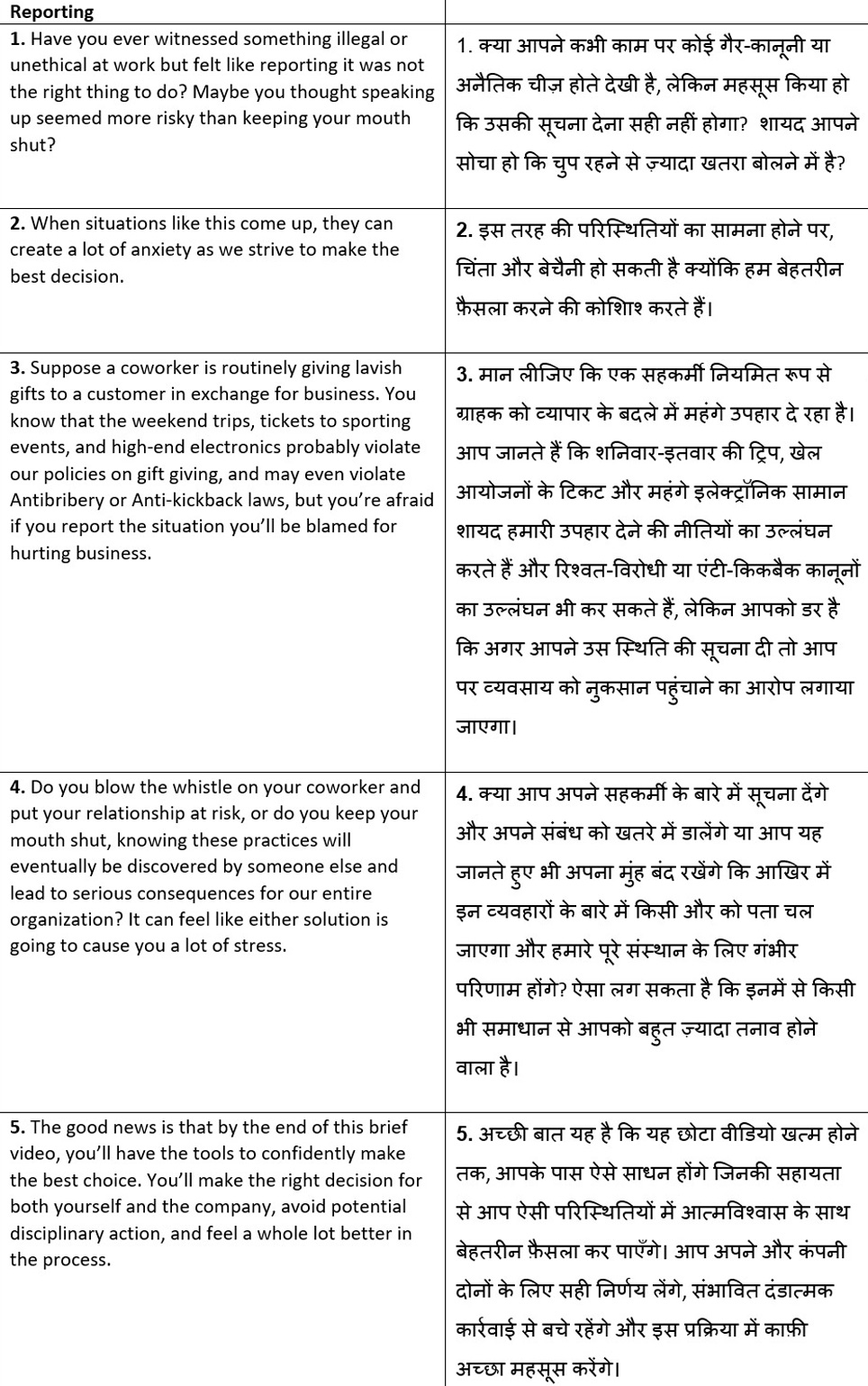 Example of a timed voice over script 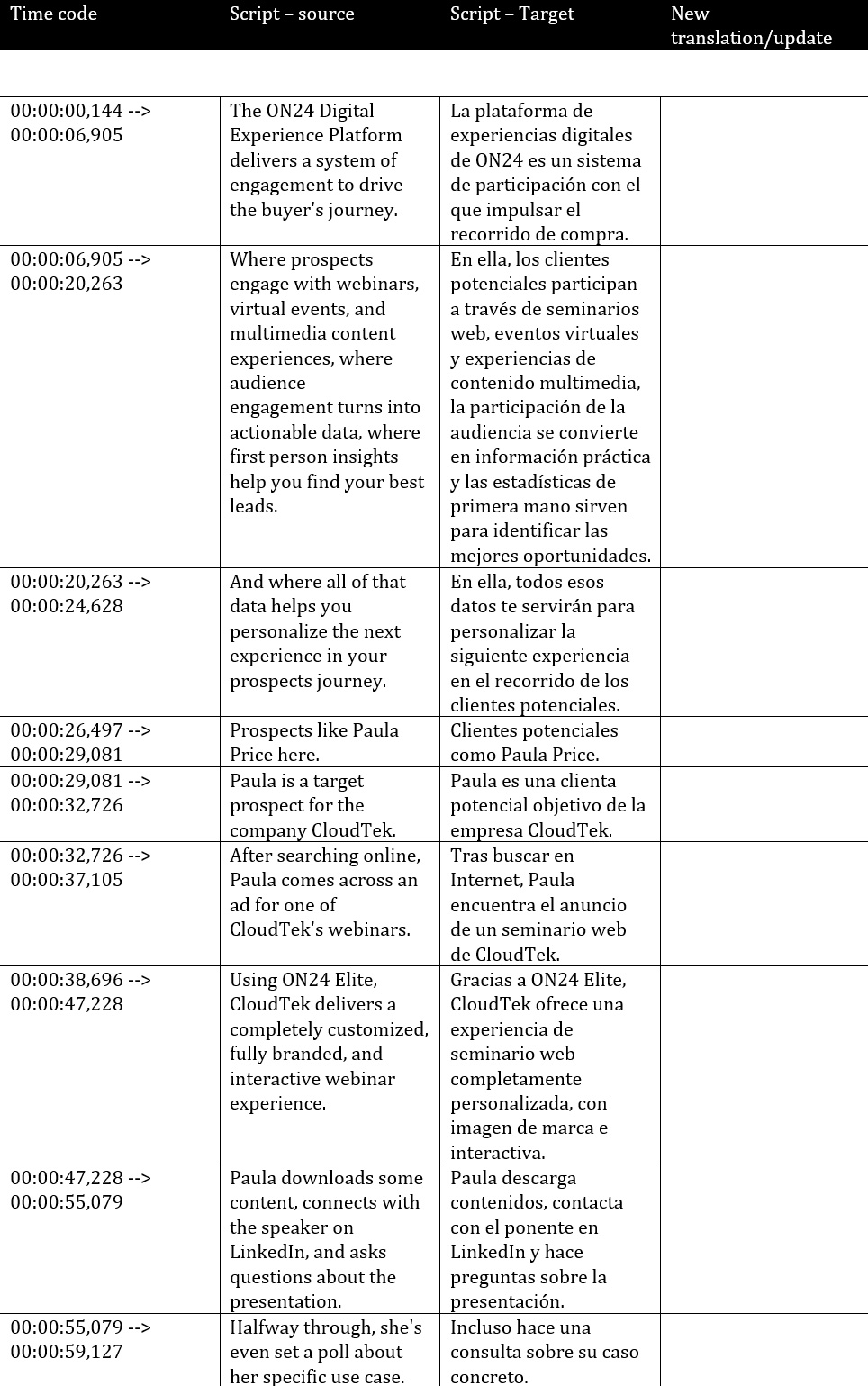 In our next blog, we’ll be discussing how to choose a voice over talent – so stay tuned. We have much more information to help you with your voice over project coming right up!