ULUS: Legends of the Nomads - Using a game to protect a writing system 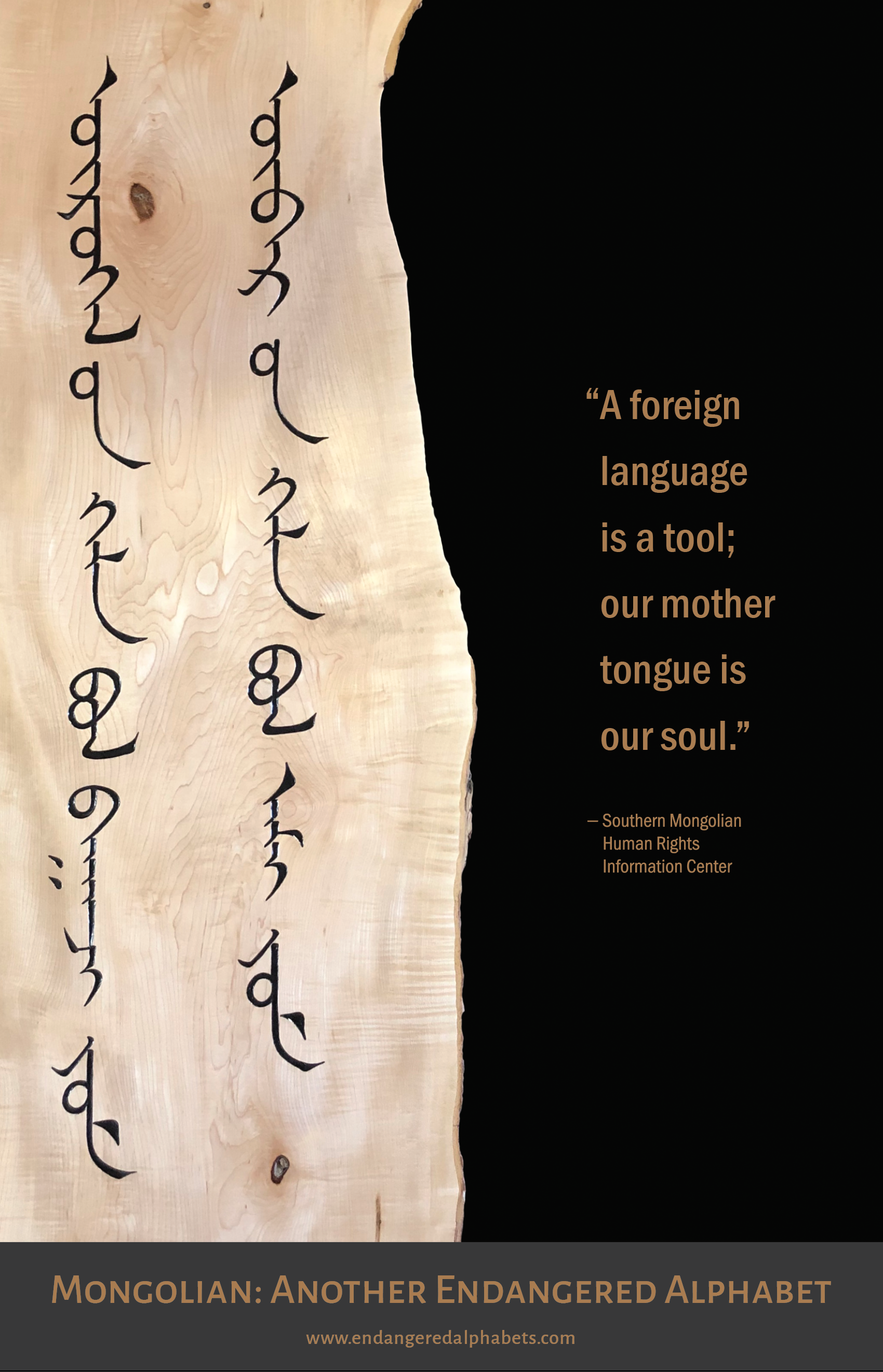 Since 2012, the Endangered Alphabets Project has been experimenting with, among other enterprises, language games.

Wait—endangered alphabets? Is that, you ask, a thing? Yes, it is.

Every culture has its own spoken language, and in many cases its own written language, too—a writing system it has developed to express its own beliefs, its own experiences, its understanding of the world. What the members of that culture have collectively written in that script is the record of their cultural identity: spiritual texts, historical documents, deeds, letters between family members, poems.

Yet as many as 90% of the world’s scripts are threatened, marginalized, even actively suppressed. Denying members of a minority culture the right to read, write and speak in their mother tongue defines them as inferior and unimportant, and leaves them vulnerable, marginalized, and open to abuse. The extent and quality of education go down, while levels of homelessness and incarceration, and even suicide go up. It’s a slow catastrophe.

Our mission at the Endangered Alphabets is to support minority and indigenous cultures with traditional writing systems that are being abandoned or forced out of existence. And one of our strategies is games. If you’re going to revitalize a culture’s language—whether spoken or written—you need to catch the interest of its children, and to catch a child’s interest, you need games.

Those of us in majority cultures have all kinds of games that teach us to recognize letters and even groups of letters almost instantly, and to imagine and manipulate those groupings in our mind’s eye, a crucial skill for swift reading and comprehension. Scrabble, Boggle, Yahtzee, crosswords, words search puzzles—we grew up with a steady supply of readily-available, affordable, fun ways to develop spectacular proficiency in written language.

Indigenous and minority peoples often have no such training aids; many, in fact, have no readily-available published materials in their script at all. So I first created alphabet decks of cards in a variety of minority scripts—Glagolitic, Mro, Chakma, Abenaki, Cree, Baybayin, Cherokee—with instructions for simple games.

(This, by the way, was much more challenging than it seemed. Should tone marks and accents be included? If so, the decks would be enormous. And how do you handle a script whose vowels don’t automatically follow consonants, but may be placed above or even before them? The Latin alphabet is easier to play with because it is so inexact: a single letter or letter-combination may be used in two, three, even half-a-dozen ways, so a single card or tile can have many values.)

The newest Endangered Alphabets game is by far the most complex, and the most ambitious in terms of the problem it tries to tackle. Let me set the stage. Roughly 800 years ago, the Mongols established the largest contiguous land empire the world has ever known. This highpoint in their history is profoundly identified with Chinggis Khan, who is regarded as the founder of Mongolia; the horse and the bow, which were handled so skillfully by the Mongols that they swept all before them; and the unique, vertical classical Mongolian script.

Since then, the vast Mongol Empire has dwindled. Most of those who identify ethnically and culturally as Mongols live in three countries: Russia, Mongolia, and China. Those in Russia tend to speak Russian and write in Cyrillic. Those in Mongolia speak Mongolian but, because of historic pressure from the Soviet Union, write it in Cyrillic, a script that imperfectly fits the Mongolian language and is a reminder of their recent subjugation rather than their earlier and more glorious history.

The traditional Mongolian vertical bichig script has until now been kept alive in what the Chinese call the Autonomous Province of Inner Mongolia, which some Mongols call Southern Mongolia. This region is also the home of the graceful, dynamic Mongolian calligraphy, identified by UNESCO in 2013 as an intangible cultural heritage in urgent need of safeguarding. This oasis of traditional Mongol culture was rudely shaken in August 2020, when the Chinese government announced that, starting that autumn, certain key classes in schools in Inner Mongolia would be taught not in Mongolian but in Chinese.

The Mongols recognized this as the thin end of a wedge that would be driven between them and their language, their script, and thus their culture.

(Meanwhile, Chinese intentions toward Mongol culture were being made clear in France, where an exhibition about Chinggis Khan was suspended after the Chinese Bureau of Cultural Heritage demanded editing authority over exhibition brochures, legends and maps, and insisted any reference to Chinggis Khan himself, or the words “Mongol” and “empire” be removed. The historical fact that the Mongols overran the Chinese was to be erased.)

To me, this situation clearly called for help from the Endangered Alphabets—but how could a tiny non-profit support a culture threatened by arguably the most powerful government in the world?

The idea of creating a game came from Olgierd Uziemblo of Warsaw University who, as a Pole, knew at first hand something about surviving an authoritarian government. He argued the strategy should be not to anger the Chinese but to find apparently harmless ways to keep one’s identity and culture intact and in memory until the threat passed. And as a sinologist whose father served as a diplomat in Mongolia, he also insisted the climax of the game should be at the annual summer festival of Naadam, one of the oldest in the world, which combines traditional Mongol sports (archery, wrestling, horse riding) with trading, commerce, and traditional storytelling.

At the heart of the game was a supposedly historical incident. When Chinggis Khan had established the largest contiguous land empire the world has known, a debate sprang up among him and his sons: Now what? What do we want to do with this ulus, this land? What kind of people do we want to be?

Should we be warriors? Should we go back to our traditional lives as nomads and herders? Should we try to be city-dwellers, like the cultures we have encountered in the West? In a way, it was a debate about a people’s soul, and that ancient/modern, rural/urban dilemma is still felt by many Mongols today. Hence the name of the game: ULUS, Legends of the Nomads.

I decided to frame this as a contest among the Mongol gods, each of which has their ulus, or vision for the future of the Mongol lands. I also decided to borrow from Greek mythology the notion that the gods carry out their quarrels on the human chessboard, so each god is represented in the game by a human champion, drawn from Mongol history and mythology. Sorghaghtani Beki, for example, the mother of Kublai Khan and arguably the most powerful woman in history. Khutulun, the noblewoman who challenged her suitors to wrestle her for her hand in marriage, and defeated them all. Zanabazar, a Buddhist sage, sculptor, poet, and creator of an alphabet.

Each champion has to gather the kinds of asset that will enable their god to establish and maintain their ulus, the assets being represented by cards—but each asset card is at a sacred site, guarded by a monster from Mongol mythology, and the champions have to defeat monsters in order to gain assets.

The movement of the game follows the rhythms of nomadic life, with the group of champions moving season by season around the Mongol lands, ending at Naadam. And the champions’ fortunes are dictated by rolling shagai—sheep’s anklebones used across Asia for divination, and in children’s games—on a mat made of felt, the traditional fabric used by Mongols to make clothing, shoes, and ger, or yurts.

We were very lucky to partner with several Mongolian experts. Gunbilegt Enkhbold was able to source shagai, both authentic bone shagai and resin shagai, manufactured for children’s games. Dash Nyamsuren, an editor, translator, lexicographer and calligraphy teacher, wrote us the names of the seasons a special “folded” script, a form of classical Mongolian especially used to enclose a word within a circle, and for other design and display purposes. Bajuna Batjargal, a fabric designer specializing in the traditional Mongolian felt fabrics, designed game mats and stenciled them with Mongolian script. Bee and Soy coordinated a small cottage industry around their ger to hand-sew the traditional Mongolian game mats.

We debated long and hard about whether learning the Mongolian language and/or script would be part of the game and decided it was just asking too much of the players. They get to see the script, and in the rule book there is a brief primer on how the writing works, and on the game site we’ve given links to excellent Mongolian learning sites, but we decided the best thing would be to open the door to the culture in general, and anyone interested in the language would have clear paths forward. One of our team, Hilko Drude, is also designing a card game that teaching the Mongolian script as a follow-up.

Even as the components for the game arrive and are assembled for shipping, I’m all too aware of Chinggis Khan’s question Now what? I’ve committed to publishing a children’s picture book dictionary in the traditional scripts of the Philippines, and to a vast research project to identify all the world’s current scripts and assess their degree of health or endangerment. And how do I fund this work, given that the world’s script crisis is not yet on people’s radar?